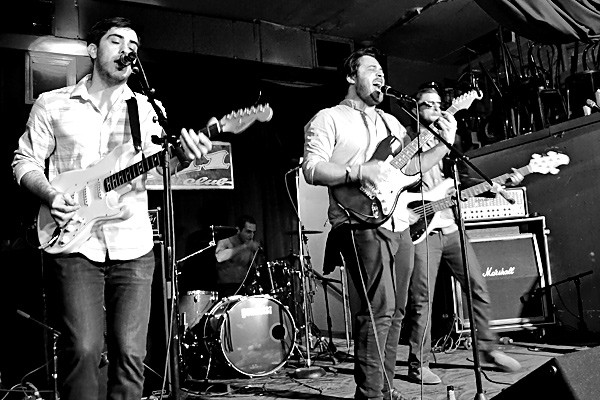 Playing with Bear Ceuse in Austin, Texas during the South by Southwest music festival was a dream come true. Every band, many of which are unsigned, is trying their best with the hope of being discovered as the next best thing.

We played three separate unofficial SXSW showcases, and learned a little bit about ourselves and the music industry along the way. After imbibing too many beers and gorging on street food, we were sad to leave the warmth of Austin, but in many ways, we are now a better band than ever.

Having just landed in sunny Austin, drummer Danny Sher and I were simultaneously lethargic and excited. With the smell of sweet meats and marijuana wafting in the air, we moseyed our way over to the Taco Shack to meet up with the rest of the band — bassist Jordan James and guitarist Adam Horne, who works with me at AOL Music handling our industry relations.

Adam had an official SXSW badge through work, so I asked him about getting into shows without one. “Good luck,” he said. From then on, I was determined to see every band I wanted to at SXSW, even without that official thing hanging around my neck.

After some pregame burritos, we struck out towards the 311 Club to play our first showcase, sponsored by Jivewired. I had been told by a native Austinite that this particular venue was on “Dirty 6,” or simply “Dirty,” referring to 6th street, the city’s main drag. It was already packed with people drunkenly moving from bar to bar to catch random acts of rock. Despite the major foot traffic, the 311 Club was almost entirely empty.

My head was throbbing from the 40 degree difference from New York to Austin, so after having filled my nose with anti-congestants, I reached for a Shiner Bock to calm my nerves. I watched a band made of 14-year-olds and a 16-year-old play an acoustic act, and thought that the 311 Club was, perhaps, not for us. However, we proceeded to rock the brick-walled joint for 30 minutes. We played … OK. Danny had to sit on a non-adjustable drum throne, and the stage monitors were full of jumbled garbage. We brushed it off as a rehearsal, and began mentally preparing for the big one: Thursday night at the same place.

I was in a unique position to really experience a lot of cool acts at SXSW due to my job. That night, most of us went to Spinner’s SXSW Showcase at Austin City Limits Live to see Family of the Year, Natalie Maines, Iron and Wine, Lord Huron and Dawes.

My boss Sarah Chazan liked the way I rocked it at 311 earlier and asked if I could do the announcements for the evening. Just having the chance to hear my voice come out of those legendary ACL speakers made my SXSW experience unforgettable.

Maines brought down the house with a slide and steel-guitar-filled final song. Ben Harper got totally schooled by a subtle, white-haired pedal steeler on stage left. After the show, I went backstage to announce the next band and began a’talkin’ with the older gentleman. “What’s your name?” I asked.

He cradled his Corona for another sip and said “Lloyd Maines.” So, Lloyd Maines is super famous, and just so happens to be the Dixie Chick’s father. I then proceeded to get rock ‘n’ roll lessons from this producing wizard. I told him I was from St. Louis and he shared a story about playing with Chuck Berry way back in the ’70s. Definitely an evening to remember.

Exhausted and hungover from our first night at SXSW, I woke up at 7AM to write up a story onM.I.A. and her ex Ben Bronfman, with one eye open and the blankets tucked around my face. Thankfully, an early lunch at Taco Cabana (why are these places not in New York?!), and a short bask in the sun brought me back to life.

That afternoon, I went with my girlfriend Katy (Read her SXSW coverage over at Huffpost Arts & Culture) over to the Filter/Doc Marten’s showcase at Bar 96. The Thermals took a 3PM show and turned it into a beer-slinging punk fest. A fat dude with a mustache mounted a twin-like front row reveler to belt out the tunes with a cigarette dangling from his mouth. The Portland band was really tearing it up in the sun, but I left early to go get ready for our evening set.

Once we landed on the 311 Club, we caught our friends and label-mates, The Can’t Tells. These guys are the real deal. They all went to Berklee, so they can really play. They’re introverted in person, yet totally balls-out explosive on stage. Hell, even popera starletCharlotte Church loves these guys.

A band named Beautiful Bodies went on after them. The guitarist had a wireless guitar and made his way out front (several times) to try and entice people to come in. This was the overall theme of the 311 Club.

When it was our turn to play, we were left with no kick drum pedal and no drum throne. Danny was livid. He tore his shirt off and yelled at the poor girl trying to keep the venue on schedule. I tuned up as quickly as I could, pleading with the bar for help. Danny’s wife went right over to the band after us and borrowed their kick pedal without asking (you gotta hustle sometimes). Then Danny took a piano bench from another band.

“You put all of that goddamn anger into your goddamn set, OK?” I told Danny. He nodded in rage. We kicked off “OKLA-EE-OHMA” with reckless abandoned and finally found something we’ve been searching for for a long time: The Pocket.

The Pocket is achieved only when your bass player has had five beers and is wearing a velvet jacket in 80 degree weather, your lead guitarist’s amp is cranked as shit, and your drummer is enraged to no end. We plowed through our set in 30 minutes and proceeded to eat more barbecue than any band should at the amazing Iron Works. [Ed. Note: This was Adam’s second trip to Iron Works that day.]

We woke painfully early on Friday to play the Circus on the Moon showcase at Russian House. Our friends in Ribbonhead asked us to join them super last minute, and we were so grateful to play Austin one last time. Free sushi, our significant others and excellent stage sound made this our best set yet.

That afternoon, I took in a few songs from the always excellent Murder by Death at Yard Dog and a few tacos at the infamous Torchy’s. I then stumbled upon the Third Man Records van and bought two of John C. Reilly’s amazing Blue Series 7-inches, followed by a thirst-quenching root beer float at Big Top Candy Store.

Once Wavves came on, I was ready to release all of my SXSW-induced stress with a 40-minute mosh pit. Nathan Williams made fun of his band the whole set for being terribly drunk, but they still managed to put on an excellent show. Not a bad end to Bear Ceuse’s three-day tenure in Austin.

So there you have it: You don’t need a badge to play SXSW or see great concerts there. As long as you stay away from big showcases, you can experience what SXSW meant from the beginning, before its branded takeover: A celebration of indie rock.